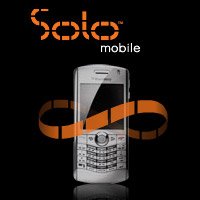 It seems that everyone is doing some jockeying around with the arrival of the new wireless carriers in Canada. You may have already heard that Rogers Wireless is launching its new Chatr brand to compete with the likes of Wind Mobile. Well, Bell is sort of doing the same.

Instead of creating a new name brand altogether, it’s going to “relaunch” the Solo Mobile brand. This repositioning and rebranding effort resurrects the Solo name from near death, since Bell has been pushing its Virgin Mobile marque a little heavier and Solo’s been lost in the mix.

The “repositioning” of Solo is not unlike what Rogers did with the Fido brand to better compete against, ironically enough, the Solos, Virgins, and Koodos of the land some time ago.

No specific details have been released about the “new” Solo Mobile brand, but it will likely offer price plans and devices that compete against Mobilicity, Public Mobile, Wind Mobile, and Chatr. That probably means cheaper devices and unlimited minutes at lower prices. Competition is getting good in Canada.