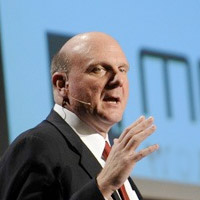 Don’t think that Microsoft is going to sit idly by as Apple enjoys its lion’s share of success with the iPad. In fact, Steve Ballmer is going so far as to say that his company is going “hardcore” with its approach to tablets.

More specifically, the emotionally charged Microsoft suit was at the Worldwide Partners Conference in Seattle when he said that they will be offering a wide variety of choice for Windows-based tablets, leading us to believe that we may not get a Microsoft-branded tablet, per se. Instead, they’ll be working with hardware partners for that.

“We want to give you a great device, a consumer oriented device, but a device that fits and is manageable with today’s enterprise IT solutions… This is a terribly important area for us. It’s certainly an area where—how do I say it?—we feel all of the energy and vigor and push that we have ever felt to innovate, to drive hard, to compete.”

In this way, it’s quite possible that we won’t see the second coming of the Microsoft Kin or even the Zune. Microsoft is a software company first and they should stick that way.

At the same time, they’re stating that the Windows tablet will play nice with multimedia functions, but they also feel that enterprise support is of utmost importance. Ballmer says they want a device “that fits and is manageable with today’s enterprise IT solutions.”