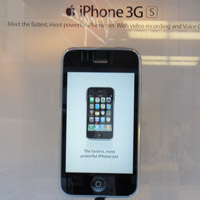 Maybe you’re not interested in having the latest iPhone 4 with five-megapixel camera that takes yellow pictures. Or even having to hold it a certain way to get signal. Maybe you just want to save a few bucks and go for the tried, tested and true model. Although the iPhone 4 has not yet launched in Canada, the iPhone 3GS has been available for ages, and up until now, you could only get the 3GS in 16GB and 32GB flavors.  Adding to the portfolio, Fido is now offering an 8GB iPhone 3GS for just $99 with a qualifying three-year contract; the 8GB iPhone 3GS will presumably replace the 8GB iPhone 3G.

It comes pre-updated with iOS4. No, you’re not going to get a front facing camera or that high-res retina display, but you’ll have a few more bucks in your back pocket to spend in the App Store. And that’s not really a bad thing.