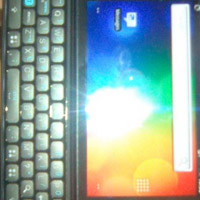 The mysterious HTC Vision smartphone we caught wind of late last month now has a face to it. A leaked photo caught in the wild shows a core design that is largely in line with other HTC touchscreen-equipped smartphones, but you’ll notice that it has a slide-out QWERTY keyboard as well. That’ll add to its thickness, but should aid in your efforts to type out longer email messages.

It seems that some of the early rumors about the HTC Vision were a little off, however. Instead of Android 3.0 Gingerbread and a dual-core processor, it seems to be preloaded with Android 2.1 and a 1GHz processor. You do get a large 3.7-inch touchscreen, as well as an optical trackpad and a SIM card. The rest of the details are pretty scarce at the moment, but this could be the first in a new long line of high-end Android smartphones from HTC. I’m just waiting to see Gingerbread in action.