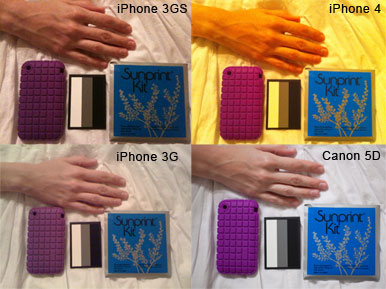 The good news? The new Apple iPhone 4 has an upgraded five-megapixel camera. The bad news? It may actually take worse pictures than the three megapixel camera on the iPhone 3GS. As it turns out, using the iPhone 4 camera under regular indoor lighting can result in some remarkably yellow-looking pictures. This is under the “warm” glow of your typical incandescent bulb.

According to Apple, the camera on the iPhone 4 is supposed to be better in low-light conditions than its predecessors, but this “boosting” process seems to boost a whole lot of yellow. You could fix the white balance with some post-processing in PhotoShop, but that’s an extra unnecessary step that most smartphone users don’t want to take, and shouldn’t have to.