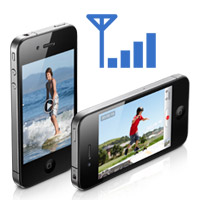 “You’re holding it wrong” doesn’t really qualify as a suitable fix for the reception issues on the new iPhone 4, so Apple has finally come forth to admit it’s a real problem. The Cupertino crew are also saying that they’re going to fix it, through a software update. Apple’s official press release claims the reception issues are not a hardware problem; they have to do with the software. As such, they’re working on a fix and this software update will be pushed out some time soon.

However, the software fix isn’t exactly what you think it is. It’s not going to actually give you any better reception with the iPhone 4 at all. Instead, Apple is saying that it’s an error related to the network strength display. When you see your drop from four bars to two bars of coverage, it really means that you only had two bars in the first place. I don’t know about you, but that’s not exactly reassuring. How about finding a way to give us four true bars? I wonder if this is largely an issue with the AT&T network.

“We have gone back to our labs and retested everything, and the results are the same— the iPhone 4’s wireless performance is the best we have ever shipped. For the vast majority of users who have not been troubled by this issue, this software update will only make your bars more accurate. For those who have had concerns, we apologize for any anxiety we may have caused. ” said the press release.

Anyone using other networks wanna chime in on this?

[Letter from Apple regarding iPhone 4]