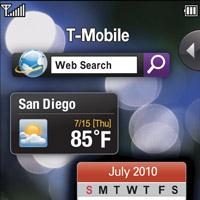 Taking aim at budget conscious consumers who are tantalized by all the touchscreen goodness they’ve seen fingering about with the HTC Incredible and iPhone 4, the LG Sentio will get your fingers tapping at a third of the price. Offered on the T-Mobile network, the Sentio’s low-price appeal has a little bit of high-end features. Starting off with a fairly large three-inch touchscreen display, complimented by three face buttons, 3G connectivity, GPS, and a 3MP camera.  Bear in mind that the Sentio is not a smartphone, no Android OS for this handset, though some of its pre-loaded software like Facebook, Twitter, even a rotating display may make you forget all about those apps in the app store you’re missing out on.

On a standard two-year service agreement with T-Mobile the LG Sentio can be had for a mere $69.99.