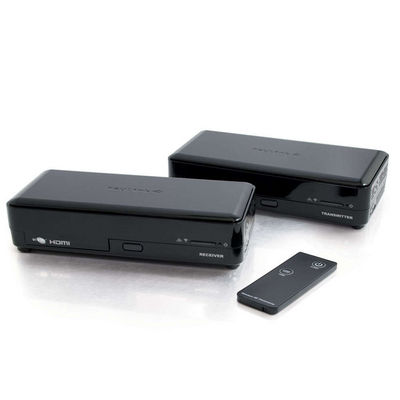 What do you do if you have beautifully exposed brick wall, a hard to place TV scenario, and you just want to set it up in the best place possible. Cables To Go has released the TruLink 60GHz Wireless HD Kit that will transmit your HDMI components, including sound, to your HD 1080p TV. The 60GHz wireless HD Kit is stupid easy to setup. They sent us a unit and it was a little dull to setup, but fantastic to use.

You have one transmitter box and one receiver box, and you guessed it, the transmitter box goes to your HD source, like PS3, Blu-ray or Hi-Def PVR. While your receiver box goes to your HD TV’s HDMI input. I am lucky enough here to have an easily accessible setup that allows my HD TV to be very close to our components, so I had to get a bit creative to test this. The sun is shining, World Cup soccer is on TV, why not watch it outside? I lugged our 42″ out to the back yard, set it up on the landscaped rocks, and began to wait, and wait. It was attempting to receive the signal, but no picture. I repositioned the transmitter and had it directly aimed to the receiver, and viola. I’m now watching soccer live in the backyard. This would be great for an outdoor World Cup final match party in the backyard.

All setup and watching the game, the picture was impressive and identical to our cable TV PVR feed directly connected to the 42″ TV. The receiver and transmitter boxes were only 25 feet away, TruLink rates it to 33 feet (10m) but I have a feeling it will do much farther if you have a direct line of sight like the company suggests. I began to test the PS3 and its video quality, and it looked great. One thing I noticed, if switching the HDMI source on your transmitter box without shutting it down, you may get some distortion in your sound. So you will always want to shut the TruLink box down before connecting, then powering it up. You also get a remote for power control. This could be good if you need to turn off the 60GHz blast of HD going through the house, or the box is mounted high up where its not typically accessible.

Each TruLink box is a little bulky looking, but finished in a nice piano black plastic that loves to show your fingerprints. It has one HDMI port to connect to either your component or TV. In the box you get two HDMI cables as well as power adapters and a single wall mount bracket.

The TruLink 1-port 60GHz WirelessHD Kit does what it says and transmits HDMI components successfully through the air to your HD 1080p TV. Quality was not 100% of the source, but was nearly identical. Although TruLink says the AV/transmission is uncompressed, it does have slight artifacts or noise on text menu guides and cartoon animations. This could be wireless interference, but it was hardly noticeable from a normal viewing distance. What I think was internal fans gave off a silent, but noticeable humm when the boxes were powered on. The plug-and-play aspect of this will appeal to many users, as it is just as easy to setup as a toaster. At $499.99 it may be worth it to save you from breaching that rental tenancy agreement, mounting that HD TV in just the right place, or setting up the game in the backyard for some summer fun.