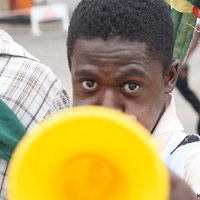 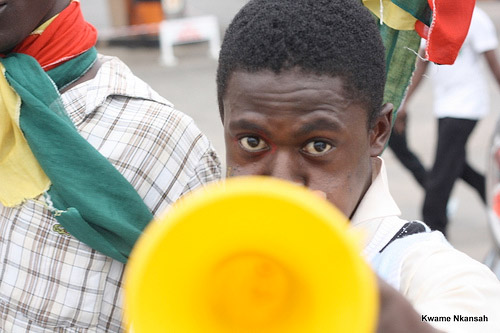 The first World Cup 2010 game I had watched was different.  It wasn’t the broadcast picture, although I was hoping for an NFL quality feed.  It was a humming background noise that slowly grew my agitation.  I later found it to be a “traditional” instrument of the South African’s known as the Vuvuzela.  This little $3 horn caused not only grief to me, but the players on the field who had to endure its humming harmonic resonance for no less then 90 minutes per match. I said during the match, “cant the audio technicians over there filter out that frequency?” Well, they probably can, but won’t because of the Fifa President’s official message sent out on twitter “I don’t see banning the music traditions of fans in their own country.”  It’s one thing to use the instrument for a goal, or exciting moment of a match, but all the freaking time?  Elgato has taken things into their own hands and released a special edition of EyeTV 3.4 that offers a feature called the “Vuvuzela Filter” to dampen the buzzing sound of the instrument.  Elgato says that this feature can be quickly turned on and off for the “full audio experience” leading me to believe it filters much more than the Vuvuzela. Regardless, if it can remove that blasted buzz, it’s worth a look.

San Francisco, Calif. – June 23, 2010 – Elgato announces a Special Edition of EyeTV 3.4 that offers a feature called a “Vuvuzela Filter”. This filter dampens the stadium buzz of live football broadcasts on the Mac, and can be quickly switched on and off for the full audio experience at any time during the game. The Vuvuzela Filter is available in EyeTV during the 2010 FIFA World Cup, and will disappear with the next software update.

Availability
EyeTV 3.4 Special Edition is available as a free update for EyeTV 3 users. To install the Vuvuzela Filter, simply use this Link. Elgato EyeTV tuners are available at the Elgato Online Store (www.elgato.com), at Apple retail stores and from local Mac resellers.