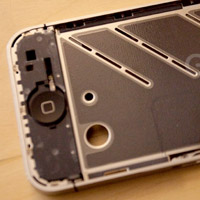 The Apple iPhone 4 price remains quite competitive when considering that it shares several of the same components that its oversized brother, the iPad does.  The same A4 processor, possibly clocked down to conserve battery life, a wireless 802.11N antenna, Bluetooth 2.1 module and 16GB/32GB of memory are some of the common similarities the two devices share.  Screen size is obviously reduced on the iPhone, Retina Display technology does give it that extra sharpness, but the iPad’s display added roughly $95 to it’s manufacturing component cost; more than double that of the iPhone 4.

A new design with the stainless steel rim doubling as an antenna is expected to enhance reception, and this is where the iPad struggles.  Packed within an aluminum shield, your Wi-Fi signal has trouble getting through that layer of cosmetic coldness with the iPad.   A smaller battery in the iPhone 4 when compared to the iPad also accounts for a lower cost.  Although claiming to last beyond that of the iPhone 3GS battery, the iPhone 4 battery is still not as bulky or expensive as the 6600 mAh iPad battery.

Our estimates on components show the iPhone 4 costing Apple just over $180.  This is roughly $80 less than the iPad’s Bill of Materials estimated by iSuppli. Adding a second camera with Flash and HD recording increases the costs for Apple, but this is a platform race; the new game is about apps and mobile advertising.  If Apple can build a heftier smartphone for customers, while still keeping costs relatively the same as they did with the iPhone 3GS, more people will likely upgrade than not.  Having these users trapped in the Apple network guarantees the company a certain amount of deliverable mobile ads with the advent of iAds on iOS. Apple wants you to be using their hardware no matter what, it’s part of their new business model and I would not be surprised to see price cuts on the iPhone 4 in the future – beyond the $199 and $299 initial offering for the 16GB and 32GB models.  Why? Simply to undermine competition and grow their estimated 10,000,000 iOS devices to deliver ads to.