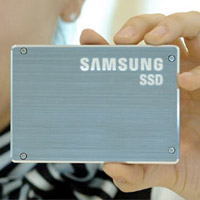 If we could only be content with the revolving platters that are host to the gigabytes of precious data we lug around in our laptop’s each day, Samsung wouldn’t need to begin mass production on these new 512GB SSD.  Tucked inside are DDR NAND chips which rather than being spun, are toggled. They are also quicker than the 40nm-class of SSDs, but just as power efficient.  With all that data theft and data loss recurring in corporations and government agencies, Samsung has put in 256bit AES encryption.  If speed is what you’re after, expect a nine-fold increase in random performance over HDDs.  No price as of yet, but expect to know next month as these begin pumping out of the Samsung factory.