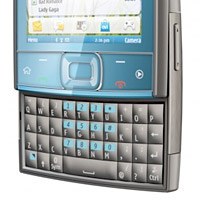 Even though Nokia continues to be the largest cell phone maker in the world, it seems to be constantly lagging behind in the design department. That is further epitomized by the new Nokia X5 that was announced today.

It takes on that strange square shape that seems to be popping up with a few other manufacturers too. You get a landscape oriented display and the usual set of buttons underneath, but the QWERTY keyboard is accessed via the vertical slider.

The visual styling, according to Nokia, might remind you “of a MiniDisc player.” This is further demonstrated by the musical focus of the X-series handsets, including access to Ovi Music and Comes with Music.

Other features include the 5MP camera, LED flash, 200MB onboard memory, microSD card slot (a 2-gigger is included), social networking integration, and IM and webmail services. Expect the X5 to ship to Indonesia in Q3 for about 165 Euro.