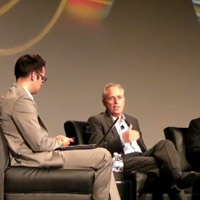 It’s very rare to see the major competitors in a giant industry sit down and openly discuss where the market is moving. It’s like when they got Bill Gates and Steve Jobs to chat in front of a live audience. Well, the same thing has happened with Canada’s telecom firms.  Over at the Canadian Telecom Summit earlier this week, a panel was moderated by Iain Marlow of the Globe. During the “Advanced Wireless Service” event, three major executives from Wind, Rogers, and Mobilicity had a one-hour discussion on wireless communications in Canada.

In the video clip below, you can see how they responded when asked about how Canada can (or cannot) support multiple carriers with a smaller population compared to larger markets like the United States. Wind appeared to be the most optimistic of the three.