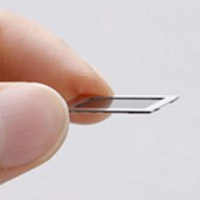 Waterproof devices are gaining in popularity across America. Over in Japan, mobile phones with the feature are already hot sellers.  Over the last two weeks here in Calgary its been raining pretty sporadically, a waterproof phone would be a good solution if I spent much time walking and talking in the rain.  After a bit of exposure normal devices with speakers get soggy, damp, and become eroded; effecting the sound quality giving your calls that dreadful crackling static sound.   Traditionally, a thin sheet of treated paper covers the exposed sound output holes to create a barrier between electronics and the elements.  This is costly, doesn’t have the greatest sound, and eventually degrades.

Japanese company Murata Manufactory Co. Ltd. Has developed what they are calling the world’s first ultra-thin (-0.9mm) “waterproof piezoelectric speaker,” it’s cheaper than traditional solutions 250 Yen ($2.70) and are immune to moisture in part by the re-engineered speaker holes.  They do look ultra-thin, we’ll have to see if they how they perform when device manufacturers begin using them.