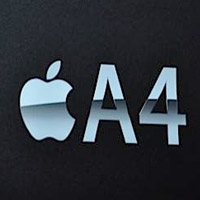 With leaks coming from California bars to Taiwanese manufacturing plants, the newest iPhone 4 release by Apple will definitely go down in history as one of the worst kept secrets the company has ever had. Was it all marketing, or just carelessness? No one will ever know, but legal actions against Gizmodo for revealing the device ahead of schedule can only lead us to believe it wasn’t intended. At the WWDC today Steve Jobs unveiled the iPhone 4 and it appears to be just as we thought it would. A front facing camera allows you two-way video communication over VoIP with other iPhone 4 users, this is done through a new app called FaceTime (see video below). HD video (720p / 30fps) can be recorded on the back side camera with the new iMovie app that will cost an extra $5. Still shots have been upgraded with a 5 megapixel sensor and 5x digital zoom from the rear which is accompanied by an LED flash. The best upgrade yet seems to be in the display, still at 3.5-inches but completely revamped offering 4x the pixel count over previous 3GS models. This is (960 x 640) rated at 326ppi which Steve calls “Retina Display,” meaning it’s much sharper than your eye can even see. Contrast ration is 800:1 and it’s an IPS similar to the iPad. That’s not all it has in common with it’s oversized counterpart, the A4 chip which powers this beast. Battery life is boosted to 40 hours of music playback, 10 hours of Wi-Fi web browsing, 10 hours of video, 7 hours of 3G talk time, and 6 hours of 3G browsing; of course this is the rating, we’ll see what real world use gives us.

Wireless is through the traditional GSM and UMTS, improving Wi-Fi to 802.11n. AT&T is still the carrier, no Sprint or Verizon, sorry folks. Software is running the iPhone OS 4, which has now been cleverly named iOS4. The “Core Motion” API gives the new gyroscope six axis of motion control between the gyroscope, accelerometer, and compass. Not sure how this will be used, but we can only suspect more advanced apps that allow for precision motion response.

Available in White or Black, with the 16GB model selling for $199 and 32GB for $299, you can expect them at your local AT&T shop for June 24th. Pre-orders for the USA, UK, France, Germany, and Japan start in one week. If this is all a bit too advanced for you, the 3GS model will drop to $99. You can also say goodbye to the 3G.