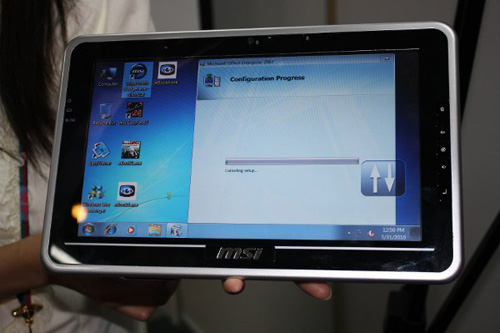 Closer to an actual tablet that we would recognize, when compared to the frankenstein Sketch Book, MSI brings you the Wind Pad. Cramping on the iPad moniker, the Wind Pad is a 10-incher running on either Google Android OS or Windows 7.   MSI actually plans to release the Wind Pad 100 later this year, with future iterations to come. Model 100 will be first, it’s going to run a 1.66GHz Intel Atom Z530 processor, 2GB RAM, and a 32GB SSD. Priced at $499 the model 100 will also sport HDMI output, dual USB 2.0 ports and a front-facing camera. The Win Pad 110 will have dual-core Nvidia Tegra 250 SoC with Google’s Android OS, and interchangeable back plates. No price or release date announced on the 110 yet, but expect it to be cheaper without the Windows bloat.