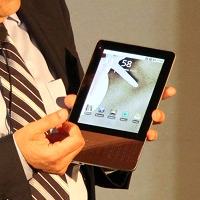 Leading up to Computex Taipei next week, Acer decided to host a little shindig to show off its LumiRead e-book reader. This sounded like yet another Kindle alternative, but then Acer CEO Gianfranco Lanci appeared on the stage with something quite different.

Yes, the regular e-book reader was there, but the device in Lanci’s hands was anything but “just another Kindle clone.” In fact, what he held was an unannounced Acer powered Google Android tablet. Even Lanci himself called it a tablet.

Not much is known about Acer’s device, what was said is that it’ll have a seven-inch color touchscreen display and it running on some build of Google’s Android platform.  Acer has not yet determined the price, but they are aiming for a launch in Q4 of this year.

Lanci did mention that going with carriers was an “obvious” option, leading us to believe that it could be 3G or even 4G equipped. I’m not sure how an Acer Android tablet would compete against the Apple iPad, just as “other” MP3 players try to compete against the iPod, but more competition is a good thing.

I’ll be heading over to Taiwan for Computex, so I’ll try to keep my ears to the ground and my eyes to the booths to see what other Android tablets rise to the surface.