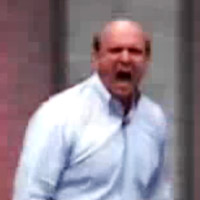 A year ago, Microsoft held 10.2% of the mobile market, according to Gartner. Those were the heady days for Microsoft, with CEO Steve Ballmer topping the YouTube charts with his visceral Developers video.

In the first nine months of Microsoft’s 2010 fiscal year, Xbox and PC game revenue fell 5% during that period, while Windows Mobile and Zune revenue was off 4%.

As Windows Mobile gets tired, a hungry pack of Google’s Android based devices, powered by a growing army of developer driven apps, is taking increasing strides in the sector. The stakes couldn’t be higher. Mobile devices set to become the dominant computing platform in the coming years.

Ballmer’s strategy is classic Microsoft: punish and intimidate with a bold reorganization of the company’s struggling hardware unit.

Entertainment and Devices Division and hardware-related sales were down 5% year-over-year, to $6.5 billion. Off with the head of design and development senior VP J Allard, and president Robbie Bach, a 22-year Redmond veteran, is retiring at age 48.

“Robbie’s an amazing business person and a close personal friend, which makes his departure a point of sadness for me,” said Ballmer, in a statement. Bach’s reports—Interactive Entertainment Business senior VP Don Mattrick and Mobile Communications senior VP Andy Lees will now report directly to Ballmer.