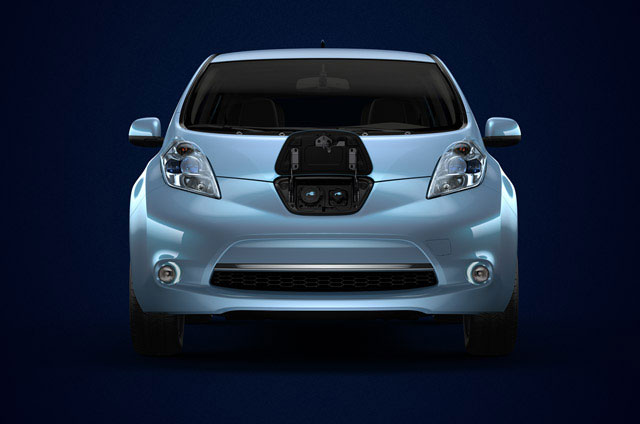 The four door electric car is powered by a 480 pound lithium ion battery pack. With a range of about 100 miles per fill, and a fill time of between 8 and 16 hours depending on the outlets used, the Leaf is primarily aimed towards city driving.

If the Leaf sounds like the car for you now’s the time to place a pre-order as initial worldwide production targets are not particularly high. So far more than 17,000 pre-orders have been placed in the USA and Japan, a number that should take the first half of 2011 to fill.

Nissan will initially produce the Leaf in a Japanese plant, and is planning on opening additional plants in the USA and England. Once all plants are up and running worldwide production target of about 200,000 a year can be expected.

The Leaf is being marketed as “zero emissions”, though on Nissan’s website there’s a small disclaimer at the bottom of the page adding “at the tail pipe”. The Leaf will create zero emissions at the tail pipe as it doesn’t actually burn fuel, a feature that helps to keep city air smog free. But the Leaf will certainly not be pollution free. In the USA 70% of power plants run on either coal or natural gas, both which produce their fare share of emissions. As lithium ion battery packs begin to lose charge capacity after several months of use, and have a very limited life span, the target production of battery packs will be significantly higher than that of cars.  As sales of electric cars, such as the Leaf, increase we can expect to see hundreds of thousands of battery packs in the land fill or otherwise being disposed of.

The Leaf will be priced at roughly $33,000 US, though many countries and states will be offering zero emissions tax deductions. A federal tax deduction of $7,500 US will lower the American price to around $25,500 per unit, many states such as California will offer further tax deductions helping to make the Leaf an affordable electric car.