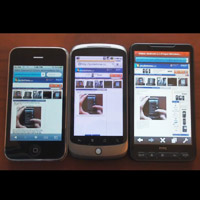 There’s been a debate whether or not Adobe Flash would be suitable for the mobile environment, its a big issue in our realm.  So how else do you determine such a thing with all this industry bias in our way? How about running some good hard tests?  Well, here they are, first speed tests of Android 2.2 and Flash 10.1. And unfortunately with Flash, it’s sluggish and choppy according to PocketNow who tested a Nexus One running Android 2.2, against an iPhone 3GS and Opera Mobile 10 on an HTC HD2.

The Nexus One was way behind the iPhone, but closer to and still behind the HTC HD2.  When Flash was presented in terms of a banner ad, scrolling up and down the page became slow and choppy.  So the PocketNow guys determined that your browsing experience is going to be hindered with Flash content on the go.

Is it worth having Flash on your mobile phone? If technologies like HTML5 keep being implemented, like Google’s recent display of PacMan on their home page, then we may not have a need for Flash; especially if it’s going to bring your smartphone down to its knees.  The other thing to keep in mind is that this Flash plugin is still a beta, and the final release could improve in performance.