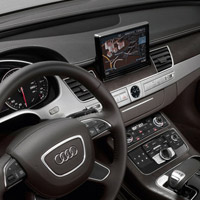 Everyone is into “apps” these days and it seems that the automotive market is anything but immune to the development. In fact, Audi has announced that it is going to start developing apps for its cars. Before you start getting excited over the prospect of mobile Shazam and iFart, you’ll want to know that these apps are a little different.

With some upcoming Audi models, they’ll be giving you the ability to add extra functionality in the form of a software update. This software can then take advantage of hardware that is already embedded within the car. Think of it as a firmware update of sorts.

By doing so, Audi will make its cars “upgradeable” after purchase. Since just about everything in a car is controlled by a computer these days, you could foreseeably gain extra performance, fuel economy, or even heated seats. These applications would then be accessed using the touchscreen introduced in the newest A8 model. Audi mentioned that the new apps could offer navigation updates (new maps!), chassis alterations, and audio software upgrades. It could also mean that hardware could be installed in the car, only to be activated later through new software. This could also result in a huge hacked apps aftermarket.

Future Cars Might Stop You From Texting While Driving