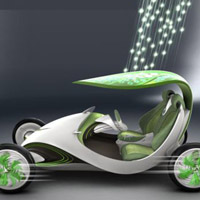 In order for humans to survive, we inhale oxygen and expel carbon dioxide. On the flip side, the plants and trees in your neighborhood “inhale” carbon dioxide and “exhale” oxygen for us. Well, this newest concept car from GM and Shanghai Automotive Industry Corporation has more in common with trees than with us.

What you see here is their YeZ Concept, a vehicle that will photosynthesize, just like that big maple tree in your backyard. It’ll absorb carbon dioxide from the air around it and emit oxygen back into the atmosphere.

As if this whole “reverse pollution” business wasn’t green enough, the SAIC YeZ concept car has also been outfitted with solar panels on the roof, as well as with small wind turbines in the wheels. This will harness some energy to use for in-car electronic components.

I guess the Prius has some catching up to do… but it has plenty of time to do it. Don’t go rushing out to your closest General Motors dealership just yet, because the functionality behind the YeZ won’t be commercially viable for another twenty years!