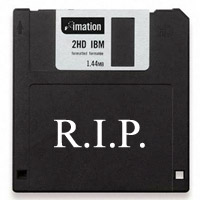 I remember when I was able to store just about every document that I ever wanted on a single 1.44MB floppy disk. That was a very long time ago and I don’t know anyone who still uses the format. Well, Sony seems to think so too, because it just killed the floppy disk.  Other manufacturers have long since abandoned the file saving format, but Sony stuck around and kept making new disks… until now. This marks the official death of the floppy disk at the ripe old age of 30.

Sony has officially announced that the production will come to an end some time next year, so if you want to grab a few disks for nostalgia’s sake, you’ll want to do it soon. You may need to head over to Japan to get them, though, since that’s the target market for Sony’s floppies at the moment.  Your local used salvage shop should also have some on hand.  As a quick trip down memory lane, let’s look at some of the major milestones. The original 8-inch floppy disk went commercial in 1971, offering 80kb of data. In 1976, they managed to make the smaller 5.25-inch floppy with about 100kb. It wasn’t until the early 1980s that Sony “pioneered” the 3.5-inch floppy disk.