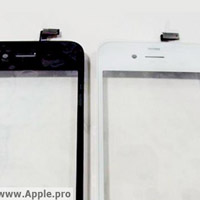 As the last six months have progressed, the world of Apple has been almost totally dominated by the iPhone 4G and its rumors (with the exception of the magical iPad of course).  The rumors have ranged from screen resolution, to front-facing cameras, and now the newest one concerns the aesthetics of the device.

The upcoming iPhone 4G is rumored to come in either a black or white shell.  This rumor stems from a Taiwanese website called Apple.pro.  Their post shows photos of matching prototype shells in both variants.   While the iPhone 3GS came available in black and white, it seemed unlikely that the 4G would because no photos of it have surfaced.  However, these latest seem to be real as they contain features that match the prototype’s size and front facing camera slot.  Look for the announcement of the new iPhone to come as soon as early as June.