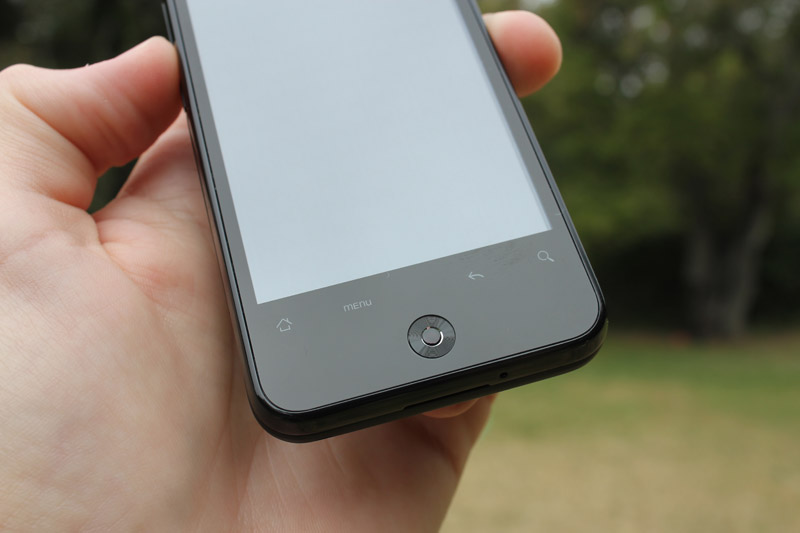 This week, I’ve had the opportunity to spend some time with the new DROID Incredible by HTC. Being an iPhone user myself, enslaved by AT&T, I look at the Droid (and Verizon) through the eyes of a newbie to the whole experience. From the moment I took this little Incredible piece of tech out of the box, I was blown away at what life could be like without an iPhone….not bad.

Breaking the features down…

Droid Incredible by HTC is the first Verizon Wireless phone that takes advantage of Qualcomm’s 1GHz superfast Snapdragon processor. This is where this device smokes anything else I’ve ever used in a phone. The launching of apps is instant. Once open, they are smooth and effortless. Loading the web browser is so fast, everyone I showed couldn’t help but to say “wow” out loud when pages loaded. When connected to Wi-Fi (802.11 b/g), the internet speed feels more akin to computer browsing than what we are accustom to on a phone.

Another gem on this Droid is it’s gorgeous 3.7 inch WVGA (480×800) AMOLED capacitive touch display. This is one of the major features that clearly demonstrates why this phone is dubbed Incredible. The touch sensitivity and detail is fantastic. Long gone are the days of Verizon phones being called touch screen when it was a horrible joke. The contrast ratio is also terrific. While the screen is bright and vivid, the blacks stay pitch black. When compared to my iPhone, this screen is far superior in resolution, contrast, and color. Movies, pictures, games all look fantastic and compliment the great GUI of the Droid 2.1 OS.

Along with the bad-ass screen, the phone has an 8 megapixel camera with dual LED flash. Again, I was blown away. The pictures were of a quality not found on phones of just a few years ago. Dark locations where the shots usually end up blurry and always grainy are lit up like daylight with the dual LED flash. So bright in fact, its more like a real flash on a real camera. It definitely gets the job done. While I didn’t take pictures until the battery died, it seemed to do a decent job of not draining the battery even when using the flash.

Got a craving for the inner Spielberg in you? This HTC device also does a terrific job at video. It records only in standard definition (640×480) but it also does wide screen (800×480). What would have been “incredible” would be the ability to record 720p video, but I’m not going to be greedy or unrealistic. Next year. Definitely, the camera-phone quality has finally arrived as an actually usable feature for more than Facebook shots and tweets.

My iPhone is starting to feel pretty lame in comparison.

Droid Incredible by HTC features the newest version of what they call the “HTC Sense experience”, which is a seven-panel home screen GUI with a wide selection of interactive widgets so the most important content is immediately available at a single touch. After a few minutes of playing around with the OS, I was transformed from confused to comfortable. The whole interface is organized and evolved from the endless scrolling I do on my iPhone. I especially loved the the amazing animations and transitions in the interface.

Some of the other features that I really enjoy are the dedicated, touch-sensitive Home, Menu, Back and Search keys. Kind of a foreign concept to iPhone users is the addition of more than one button on the phone for navigation. Again, after a few minutes, I began to really appreciate the ability to instantly access those features in any app or page.

There is also an optical joystick, what is akin to that of a ball-less mouse, but it wasn’t as cool as I was hoping it would be. In my opinion, even slightly redundant to the whole touch-screen thing. I found its use was limited in purpose in most situations. I can see that for certain apps or games it might come in handy as a great alternative to having your fingers covering all the action up.

One of the things I noticed right away after the amazing screen and speed of the Droid Incredible is the little phone’s sound quality. Again, fantastic. Calls are clear and loud with little speaker distortion. Being an AT&T user I’m not sure if its Verizon or the phone itself but I noticed the calls were “gated”. A term and technique used in the music industry to describe when audio is muted once it falls to a certain level of volume to reduce noise. Everything in between the words spoken in my conversation were gated. The silence while nice, also is a bit unnerving as it I found myself repeatedly asking to see if the call was dropped “can you here me now?”. Something I’m used to with AT&T.

Calls aside, the speaker for playback of apps, music & movies was fabulous. Loud and clear. One of the loudest speakers I’ve heard in a phone. You tube clips and songs played back with booming command without the few in audience having to strain to hear the punch line.

The Incredible is equipped with 8GB of internal storage as well as a MicroSD slot which can handle an additional 32GB, which you’ll need if you want to use that amazing 8MP camera to go crazy with. This is also a feature that gives this device a leg up on the Apple fanboys out there waiting for the new iPhone next month. Apple will most likely never allow external memory as an option to protect their OS and their business model.

Some of the other features: the phone also has seamless integration with Exchange ActiveSync, quick and easy access to Flickr for sharing and viewing pictures, video, and Android Market with more than 30,000 Google applications. One app I immediately setup was the Facebook app (which came pre-installed). It was fast and hit the major points, however it fell dramatically short of the features offered in the iPhone’s version of the app. While I didn’t download other apps, I hope developers realize that many (most) people use phones other than that of Apple’s.

With the release of the DROID Incredible by HTC, I find myself for the first time really considering jumping ship on the whole Apple thing. The other kids on the playground have finally caught up to little Stevie, and in some instances kicked his butt. The speed of phone in general is ridiculously fast thanks to that 1GHz processor. The Droid 2.1 OS is nimble, beautiful and intelligent. The camera and video ability is superior to anything else on the market today. Finally, the whole purpose of the device, that of being a phone, is loud and clear and sips on the battery like a gentleman.

For those who looking for a new phone: look no further than the DROID Incredible by HTC.

For those who are waiting for the new iPhone to be announced, if Apple doesn’t at least meet all (or most) of the features in this device, feel confident in jumping ship with me.