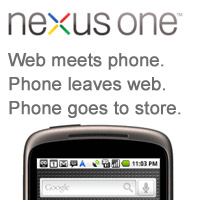 Well, that experiment didn’t exactly go as planned. When Google first launched the Nexus One, the phone was really only available through the search engine giant’s web store. This was fine for early adopters, but not so good for everyone else.   In fact, it seems that the sales through the web store have been so bad that Google is giving up on it. An official post on the Google Blog says that they are no longer selling the Nexus One through the web store.

Instead, Google will be working to provide more retail availability. This means that they’ll be working more closely with carriers to get a more traditional retail experience for customers. They’re expanding the business model used in Europe to the rest of the world.  As the web store cranks down, more people will be able to have some hands-on time with the Nexus One through said retail locations. The web store will become an “online store window” where people can browse the variety of Android phones available globally.

I guess this makes sense. We have to realize that people who buy unlocked phones at full retail price are in the minority. Most people still want that carrier subsidy and that’s why they’ve turned to the Droid Incredible at Verizon and the HTC Evo 4G from Sprint.