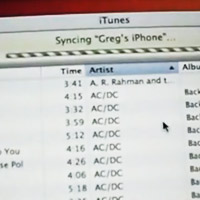 Wi-Fi Sync is an app for the iPhone that allows you to sync your iTunes library on your Mac over a Wi-Fi connection; the clincher, it has to be jailbroken.  Apple doesn’t allow wireless syncing for god knows what reason, but if they were planning on it than we would have probably heard of it in the iPhone OS 4 update.  Until then, you will have to resort to seedy methods; the app sells for $10 from the hacked app store Cydia.  I wonder if it will do the same for iPad and iPod touch?  A program similar to Wi-Fi Sync was started back in 2007 called uSync, it required executing shell scripts and libs: “SVN GTKPod/libgpod and SVN GNUPod (with a couple extra modifications),” and hasn’t gone anywhere since.