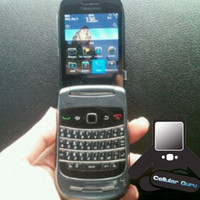 I’ve got some good news and some bad news for all the Research in Motion fans out there. The good news is we have very good reason to believe that a new BlackBerry form factor is coming down the pipes, complete with video evidence. The bad news is the video of the BlackBerry Bold 9800 Slider has been removed.

Research in Motion doesn’t appear to be raising as big of a ruckus as Apple did over Gizmodo’s “leak” of the upcoming iPhone 4G/HD, but the boys and girls in Waterloo were peeved enough to go after the YouTube video. Where it once stood, we get a message that the video “has been removed due to terms of use violation.”

What did we manage to learn from the video before it was pulled? Well, the obvious is that this is a Bold Slider, much like what we have now with phones like the Palm Pre. It’s touch-sensitive, larger than the current Bold, but smaller than the Storm 2.  Not surprisingly, the optical trackpad is still there, as is the usual RIM-style QWERTY keyboard. There was a brief glimpse at BlackBerry OS 6.0, but it was brief at best. Personally, I haven’t been much of a fan of the flip ‘Berry or the touch ‘Berry, but the Slider Berry could be good.