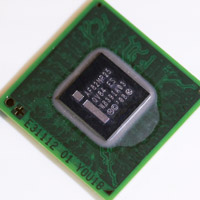 As great as the newest smartphones may be, most of them suffer from poor battery life. It’s not uncommon to see iPhone and Android users reach for a wall plug every 24 hours. Intel wants to change that. That’s why the chip maker is developing a version of its Atom processor specifically for mobile phones.

Set to be a part of the Moorestone processor line, the proposed upcoming Intel Atom processor will be small enough to fit in a variety of mobile devices. This includes cell phones, mobile internet devices, tablets, and the like. So, how much more battery life can you expect?

Atom processors for netbooks help those units last longer than their larger notebook counterparts, but the smartphone jump seems even more impressive. It’s saying that these Atom-powered smartphones can last up to 10 days on a single charge. Ten days! That sure beats the two days I usually get out of my Nokia E71.

That’s ten days of standby, of course, so your mileage will naturally vary based on your individual usage patterns. Intel is saying that you can expect six hours of 3G talk time and two days of music playback, for instance.  For some reason, I’m taking these claims with a huge grain of salt. I expect the Intel Atom Z6XX series to be better than the status quo, but pushing it to over a week will be a stretch for a high-powered smartphone.

“After we delivered the first-generation Intel Atom processor with 10x thermal power reduction, we challenged ourselves to achieve 50x power reduction at the platform level,” said Belli Kuttanna, chief Intel Atom processor architect. “We are delighted to have exceeded this goal while increasing performance and are proud of the architects and designers who consistently reinvent the possibilities of Intel Architecture.”

It may work out in our favor after all. The new chips are so efficient that Intel has tweaked the three main power use components of the processor, including >50x reduction in idle power, >20x reduction in audio power, and 2-3x reductions across browsing and video scenarios . This all translates in to a superior performing device when playing HD content.