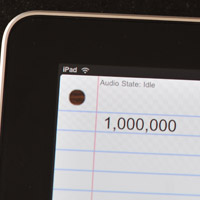 In case there was any doubt as to whether Steve Jobs and his team would be successful with this new product launch, that doubt has really officially been removed. Yes, the Apple iPad has been a resounding success and they have already reached one huge milestone. The iPad has been around for less than a month, but already one million units have been sold to enthusiastic consumers. The iPad launched on April 3 and Apple says the seven figure sales mark was broken in just 28 days.

To make matters even better for Apple (and Apple stockholders), that one million figure doesn’t even include the iPad 3G launch even that took place over this past weekend. Experts are estimating that an additional 300,000 of said iPad 3G units are in the hands of customers too.

Continuing to toot its own horn, Apple reporting over 12 million app downloads from the iPad App Store and over 1.5 million eBooks have been acquired through the new iBookstore. Big numbers, big money, big success.

Apple as a cultural phenomenon? I’m not as big a fan of the company’s products as some other people, but these sales figures don’t lie. The iPad hit the one million sale mark well before the iPhone did (74 days), so the company’s popularity is definitely on the rise.