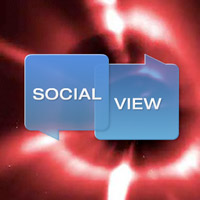 It’s clear that Rogers Wireless wants to capitalize on our interest in social networking sites like Facebook and Twitter. They know that people want to stay connected in that way, so the marketing efforts are shifting in that direction. That’s why Rogers has three new “Social View” plans for us to consider.

Well, sort of. Not really. There’s an announcement that came out this week about the three new plans, but Rogers isn’t exactly forthcoming with what these plans will entail. Instead, they’re just saying it’s part of the “Social View” feature.  My suspicions lead me to believe that these services are available somewhere already, and many people are using it, it’s just called Android.

In short, the Rogers “Social View” is a pre-installed feature on select smartphones that will bring together “your contacts’ updates from popular social networks. It also includes a display of recent traditional communications such as texts, calls and instant messages from your contacts.”  Does that sound familiar to you? It should. It’s the same philosophy that seems to be happening with phones like the Palm Pre and Microsoft Kin. On the Rogers front, it seems to be treading in the same territory as HTC Sense, Motorola MOTOBLUR, and Sony Ericsson TimeScape.

The phones that this “new service” is built into are the LG Eve, HTC Magic, Sony Ericsson Xperia X10, and up and coming Motorola Quench and Acer Liquid E.