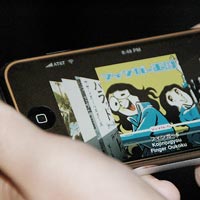 You know, before the iPhone launched in Japan, I thought it was going to be a disappointment for Steve Jobs and Apple. It wouldn’t be a flop, but I didn’t think it would achieve the same level of market penetration as it was able to enjoy in the United States. Oh boy, was I wrong.

A study conducted by MM Research Institute has revealed that the iPhone has a 72.2% market share in Japan. There are 2.34 million iPhones in the land of the rising sun, representing a dominating force among smartphones.

Part of the reason why these numbers are so surprising is that capacitive touchscreens aren’t nearly as popular in Asia as resistive ones. The latter, when used with a stylus, are much better at complex handwriting recognition, which is necessary for the writing in Asian languages (like Chinese and Japanese).

It’s not like Apple stormed in and took over the place right away either. In fact, the iPhone’s growth is accelerating — the 2009 growth rate was double that of 2008. If they keep up this pace, it means that Apple could have almost complete and utter domination. Rounding out the top five in smartphones are HTC (11.1%), Toshiba (6.8%), RIM BlackBerry (4.3%) and Sony Ericsson (4.3%).

This all said, the numbers are a little inflated. Japanese feature phones are more popular than smartphones. When you consider the overall Japanese cell phone market, Apple only has about a 5% share.