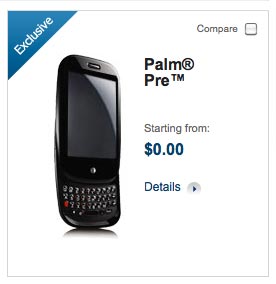 The Palm Pre was supposed to be the savior for Palm. It was to rise above the Treos and Centros that came before it, offering a truly powerful alternative to the Apple iPhone. Things haven’t gone quite as well as Palm had hoped, but that seems to be working in your favor.

If you’ve been patient and wanted a bargain, Bell Mobility may be the place to go. The Canadian carrier has slashed the price on the Palm Pre to a much more affordable zero dollars and zero cents. Not one penny.  Back when it first launched, the Palm Pre was sold by Bell for $199.95 with a three-year contract, placing it on par with the iPhone. Then, they dropped the price. Then, they dropped it some more. The kicker is now you can get it for $0.00 with a two-year contract. Yup, Bell even took a year off the offer.

Slow sales may be a major motivator for Bell, but there could be another one. You know how American’s have the Palm Pre Plus and Palm Pixi Plus? It’s possible – though far from confirmed – that Bell could be doing the same. Or they could just be giving up on Palm altogether.  After all, HTC already did the same.

Verizon to Launch Palm Pre Plus, Pixi Plus on Monday