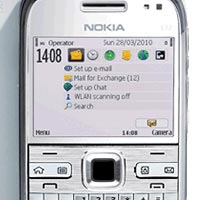 Ever since Telus decided to embrace HSPA, its assortment of smartphones has become much more desirable in my books. One of the newest phones bound for Telus is the Nokia E72.

As a proud owner of the Nokia E71 myself, I guess you could say that I’m a little biased toward this news, say, but no more so than an iPhone owning news reporter. Either way, it’s good news for Telus smartphone fans. It seems that someone was able to snag a screenshot from the internal database at Telus Mobility. It clearly includes the Nokia E72 smartphone, but there is no mention of a release date just yet. The rumor says it’ll be out in the next couple months.

As a quick refresher, the Nokia E72 is basically a beefed up version of the E71. The camera gets bumped to five megapixels (in addition to the front-facing video camera), the processor clocks in at 600MHz, and the five-way navigator gets upgraded with an optical trackpad. Other features include the 2.4-inch QVGA display, 3.5mm headset jack, QWERTY keyboard, GPS, Wi-Fi, and microSD expansion.