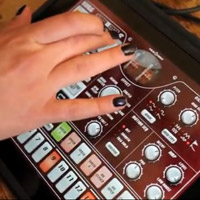 Is there anything the iPad can’t do? It won’t be replacing your MacBook any time soon, but if Rana Sobhany is any indication, it could be replacing your much more expensive DJ equipment. What she has done is hooked up two iPads to a basic $100 DJ mixer and a $100 USB sound box, reproducing a full DJ setup.

From what we can gather, Rana really is the first iPad DJ. Each of the two iPad devices have been loaded with several DJ-related applications and then they are connected to a cheap $100 DJ mixer so that she do things like cross-fade and hit kill switches. This could have been done with two iPod Touches, or iPhones for that matter, but since we are now in iPad hype mode, this seems extra super cool.

In terms of the apps being used, they were actually developed before the iPad came to be, so it’ll be interesting to see how much more iPad-optimized DJ apps will improve the situation further. She’s using Groovemaker House, Looptastic HD, iDaft, AC-7 Pro, Pianist Pro, and Sonosaurus Rex (link anyone?).

The video is a little on the long side (almost 18 minutes), but it’s worth watching if you’re looking to get into DJing and don’t have a ton of dough to blow on pricey equipment.