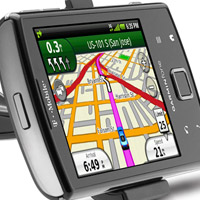 As it turns out, AT&T isn’t the only one doing the smartphone thing with Garmin. T-Mobile USA is getting a piece of that navigation pie too with the announcement of the new Garminfone. It’s being offered exclusively through T-Mobile later this Spring.  To avoid any confusion with the Garmin smartphone being sold through AT&T, T-Mobile has decided that its version will be called the Garminfone rather than the nuvifone. This also allows them to say that it is exclusive to their stable.

In terms of features, the new Garminfone gets a large 3.5-inch touchscreen display, 3G connectivity, 3MP camera (with geotagging), Garmin’s “robust navigation experience.” Another big kicker is that the Garminfone will be powered by Google Android, opening up possibilities for all sorts of apps and customizations.

The Garminfone also comes with something called Garmin Voice Studio. This Android application allows customers to record and share custom voice directions from family and friends. So, you can tell grandma that she needs to turn left at the big oak tree… or something.

T-Mobile isn’t forthcoming with pricing information or a specific release date, but with a “later this spring” release window, they’ve only got a couple more months anyhow.