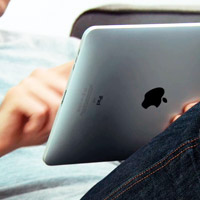 Right now, the only version of the Apple iPad that you can buy comes with Wi-Fi alone with a 3G radio nary in sight. In fact, Canadians can’t officially buy one within our borders yet, having to trek down to the United States to get an iPad. That’s going to change very soon.

That’s because Rogers will sell it and, hopefully, this will be at a subsidized price. That can help you save hundreds in the short run, though you’ll be stuck with a data contract in the long run.

The exact details of the Rogers iPad agreement have not yet been revealed, but the company did say that they will “have special iPad price plans for all models” at the end of May. The assumption is that the data plans for the iPad will be in line with the Rocket Stick and other data-only devices.

Originally, we had thought that the Canadian launch of the Apple iPad would be happening April 24, but that has changed too. Apple sent out a press release citing the huge US demand for the device, pushing international release back an extra month. That puts it at the end of May, coinciding with the Rogers release.

Expect pricing and pre-order information to populate the Apple Canada site on May 10.