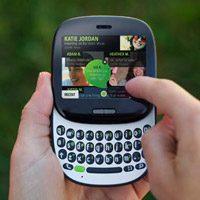 The journey has taken longer than any of us expected, but that whole “Project Pink” business at Microsoft finally emerged as something real yesterday when the company revealed the Microsoft Kin line of mobile phones. This release follows the acquisition of Danger and a partnership with Verizon, Sharp, and Vodafone.

To usher in its freshman foray into self-branded cell phone hardware, Microsoft is going to offer two different handsets at launch: the Kin One and the Kin Two. You may have once known these by their respective codenames during the Project Pink development: Turtle and Pure. It’s debatable whether these new names are any better.

Not to be confused with Thing One and Thing Two from Dr. Seuss, the Kin One and Kin Two feature the same kind of user interface and the same kind of social media-minded fundamental functionality, but they are quite different in size and stature.

Starting with the similarities, they’ll both have the same operating system, which has yet to be named. I guess we’ll just call it the Kin OS for now, or assume it’s Windows Phone 7. The main homescreen is known as the Loop and it is an automatically updated, real-time stream of all your news feeds, social network updates, emails, text messages, and the like. Yes, automatically updated.

Regarding differences, the Kin One (or Kin 1) is the smaller of the two, looking almost like a stout Palm Pre. The compact form factor allows it to literally fit in your palm. You get a vertical slide-out QWERTY keyboard (like the Pre), 5MP camera, 4GB storage, and full access to the Zune music store.

The Kin Two (or Kin 2) is the larger of the two and it looks more like a regular smartphone. Like the Kin One, it has a touchscreen, but this one is bigger. It also bumps up to 8GB of memory, an 8MP camera with 720p HD video, and a horizontal slide-out QWERTY keyboard.

It’s been some time since we last saw the T-Mobile Sidekick (also sold as the HipTop in some markets). That represented a partnership between Danger (who made the OS) and Sharp (who made the hardware). It seems that they have once again been combined for the Microsoft Kin.

Just as the SideKick line was never a true smartphone, so is the case with the Kin One and Kin Two. They’re not supposed to be real smartphones. Instead, they cater to a tech-savvy youth market who are more inclined to interact with their friends. Is this the second coming of the Sidekick? Yes and no.

Back when the Sidekick was still popular, smartphones were more expensive, more inaccessible by the average consumer, and more catered to the business market. That has changed and, with that change, I fear that Kin will not be able to carve out the same kind of following as the Sidekick.

This social media thing isn’t going to blow over any time soon, so it seems that all the hardware manufacturers are looking for ways to better capitalize on this interest. Motorola did that by using Google Android and developing the MOTOBLUR UI to go over top of it. We’ve also seen other phones with amalgamate information across networks so that you have a unified contact list.

The Microsoft Kin is doing much of the same, but I find that the user interface becomes far too cluttered as a result. Social networking is its clear focus, to be sure, but there has to be a better way to organize all that info.

Be Wary of Battery Life and Data Usage

The “always on” social networking aspect of the Microsoft Kin One and Kin Two concern me. According to Microsoft, the Loop constantly updates itself. If you have a lot of Twitter and Facebook friends, that’s a lot of data to rifle through. (It seems that the updates are every 15 minutes, from what I hear, and not truly “real time” like how RIM’s push email is real time.)

Further still, every picture and video you capture with your Kin device is automatically saved in the cloud as part of Kin Studio. The cloud-based interface stores and organizes your captured memories based on a timeline and with geotagged GPS information. This means that you are sending boatloads of data and your GPS is always on.

This can’t be good for battery life and it can’t be good for your data plan either. Imagine uploading several 8-megapixel pictures and 720p HD videos to the cloud throughout the day. Unless you have a truly unlimited data plan and you’re always next to a power outlet, this could pose an issue.

The Palm Pre All Over Again?

The Palm Pre was hailed as the savior of Palm. It was going to pull it out of the dated mess of Treos and Centros, letting the company emerge as a leader in the new generation. While the Pre has been able to sell some units, it hasn’t been the resounding success that they had hoped.

Will Microsoft be doing the same thing with the Kin? The “Sidekick” philosophy doesn’t work in today’s climate, I don’t think, and Microsoft hasn’t exactly been a huge winner in the hardware arena (think Zune vs. iPod). But maybe that’s enough for MS; maybe they’re okay with second or third fiddle.