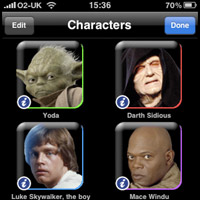 Every young fan of Star Wars has at one point dreamed of having their own light saber. Not necessarily for battling storm troopers, but just to wave around to hear that rad humming voooooooov sound. When the Light Saber Unleashed for iPhone was released, we all came one step closer to that dream. It made for a virtual light saber that had the look and sound effects on screen.

Star Wars: Lightsaber Duel is an enhanced version of the original Lightsaber app. It allows you to use the Lightsaber of several popular Star Wars Characters. New additions to the roster include Luke Skywalker, Yoda, the Emperor, and several others. All of the various hilts, blade styles, and colors of the characters can be used to make your own custom character and saber. A great addition I really liked was the ability to use Force Lightning with the applicable characters of the dark side like the Emperor. To those of you wondering how to use the lightning, press the lightning icon on the character, and shake the iPhone like you would if you were wielding a Lightsaber. However, you can’t use it on a created character.

The most important addition in Lightsaber Duel is the multiplayer feature. This mode allows you to find other Lightsaber Duel users and duel through Bluetooth. After actually spending a considerable amount of time using this feature with a buddy, I can tell you in full confidence that it works. The iPhones do manage to sense when they are near each other and if motivated, a fun duel can definitely be had. The only bad part of this feature is that the Bluetooth takes a while to connect even on WiFi.

All in all, I really dig Lightsaber duels. When I downloaded this app, I expected to end up recommending to just stick with the original free version, but I must admit I was pleasantly surprised. As a Star Wars fan I think it’s a fun little thing that will give you an excuse to shake your iPhone around for only $1 on iTunes.