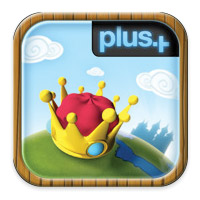 We Rule is a popular iPhone and iPad game that is tearing up the app store. The full version is available free and has grown with a cult following on facebook and dozens of forums throughout the internet.  So what is We Rule all about and how does it generate so much money?

We Rule gives you a virtual interactive medieval kingdom to run.  You build houses, roads, businesses, and natural works around your stronghold to create a thriving town.  You generate revenue to build these works by planting crops, fixed taxation of houses, and businesses.  Businesses in most of these types of games are usually not that beneficial, but in We Rule it is mutually beneficial to kingdoms in order to promote socialization.  As you network on We Rule, your businesses are hired, and you hire other people’s businesses to generate income and XP (experience).  XP unlocks more crops, buildings, and strongholds, as well as Mojo.

Mojo generates all of We Rule’s income, thus making it such a high grossing app.  Mojo allows you to speed up the process of building things and growing crops, potentially shaving hours of waiting time.  For the impatient, Mojo is sold by the bunches, anywhere from $5 for the smallest amount of Mojo, to $50 for the most expensive.  With thousands hooked on the game, a massive amount of Mojo has been sold.  I myself bought Mojo while playing the game.  It does speed up the process of gameplay, but it is also expensive.

The look and feel of the game is superb.  The game is colorful and clear.  The sounds and medieval tunes add to the romantic appeal of the game.  The touch controls can be a tad imprecise at times, but no more so than many other games including Zenonia 2.

My main beef with We Rule is probably due to its widespread success.  It can be very difficult at times to connect to the server to play the game.  This can lead to frustrations, but I do see it being corrected as future versions of the app are released.

Inevitably, We Rule is a great app that to some, can be one of the most addictive games you will ever play on any gaming system.  It is one part Farmville and one part Dawn of Discovery. If you like the Middle Ages, Chivalry, or civilization building games, then We Rule is for you.