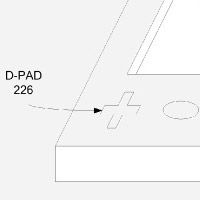 One of the biggest knocks at the iPhone as a gaming device is the lack of some sort of control buttons.  With no gaming buttons,  it can be difficult to control a game, as there is no feel to the iPhone’s current controller: the touch screen.  This is especially prevalent in the Zenonia games.  To correct this problem, Apple has filed a patent to put controls on the iPhone and possibly future iPad versions.

The new controlling patent, as shown on Patently Apple, shows a shell case like the Powermat which wraps around a portable touch screen device to create a more traditional portable gaming device.  It will feature a rectangular D-Pad on the left, with two control buttons on the right.  The patent appears very similar in layout to the original Game Boy Advance.

The control layout could be a godsend for the iPhone in its quest to become the ultimate portable-everything device.  It would take the greatest weakness of the iPhone and iPad and turn it into a strength.  Apple can even create other types of devices based on it that would include a joystick or more control buttons.  I believe Apple will take advantage of this and use it as their main accessory for the next generation of iPhones and iPads.