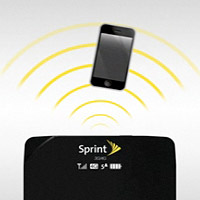 So, you’re on a Spring Break trip, perhaps with the iPad you managed to snag or your tried, true, trusty netbook, but you can’t seem to find a Wi-Fi hotspot anywhere. You’re desperately looking for a place to connect but there’s nothing there. Sprint and Sierra Wireless have you covered, literally.

One of the newest devices to hit the shelves is the Overdrive 3G/4G Mobile Hotspot by Sierra Wireless.  Made available through Sprint, this credit card-sized device takes 3G and 4G connections and converts them into a usable Wi-Fi hotspot for up to five Wi-Fi supported gadgets – like the upcoming HTC EVO 4G.

They say that the 4G hotspot will allow your iPad to surf the web up to 10 times faster than with an equivalent 3G connection. This makes it great for Skype, video streaming, and other data-intensive applications. If you want, you can use the Overdrive 3G/4G Mobile Hotspot to play online games with your Nintendo DSi too.

Naturally, Sprint 4G isn’t quite everywhere just yet, but it is available in 28 major markets across the nation. These include Atlanta, Baltimore, Dallas, Las Vegas, Portland, Seattle and more. As this year progresses, Sprint expects to offer 4G to up to 120 million people, including pending launches in Boston, Cleveland, Los Angeles, New York, Pittsburgh, and St. Louis.