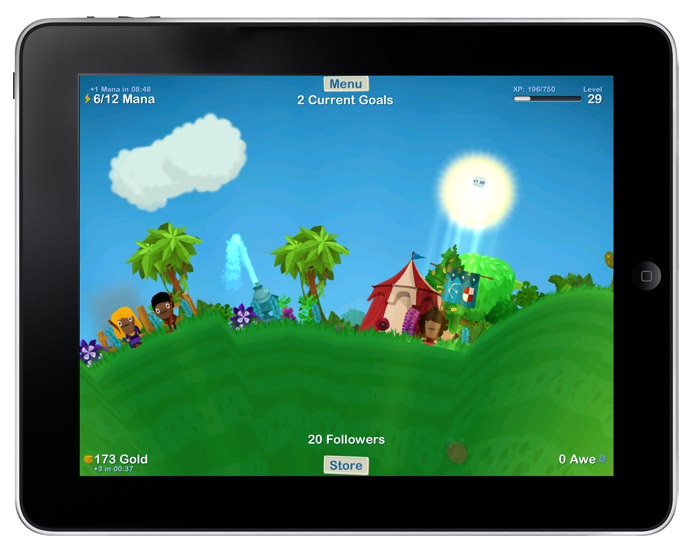 All visually stunning, GodFinger, We Rule, Charadium, Flick Fishing, NBA Hotshots, Warpgate and CastleCraft from ngmoco are set to hit the iTunes App store for the Apple iPad.

Quite a powerful lineup to hit the iPad all in one blast. ngmoco says go big or go home, and brings you their most popular titles for the multi-touch machine.

“We are incredibly excited about iPad and we believe it will have the level of impact that iPhone and iPod touch continue to have in mobile gaming,” said Neil Young, CEO, ngmoco. “Humans react to what they see, what they hear and what they touch and iPad radically reshapes how players feel about interacting with games. The bigger screen and innovative Multi-Touch capabilities make our games more immersive than we ever imagined.”

These titles will all be available from ngmoco on the iTunes App Store. Following is a gallery and description of each of the titles from ngmoco’s press release.

GodFinger puts the power of a god in players’ hands. Commanding the fate of a planet and its inhabitants, players must create “followers,” whose worship will help fledgling gods earn gold, grow stronger and learn new abilities. Gods can demonstrate their powers by moving mountains, flooding the land, and striking down the planet’s denizens to be as benevolent or as malevolent as they wish. The larger screen size brings more of the planet to life and multiplies interaction with followers and the environment.

We Rule lets players command whimsical kingdoms full of castles, farms and loyal citizens. Rulers must oversee crop harvests, collect taxes and trade with neighboring realms via the social connectivity of the Plus+ Network. Wise kings will also act as city planners and landscapers, and build, grow and craft their own social microcosms. We Rule for iPad expands the kingdom view and puts more power at the fingertips of the player with picture in picture functions for drag and drop functionality.

Charadium is a fast and furious multiplayer game that invites family, friends and players from all over the world to match wits in the ultimate draw-and-guess showdown. In Charadium, players are tasked with bringing words to life through drawings. One player draws a charade with their fingers, while the others must guess the word before the timer runs out. With language support for English, Spanish, French, German, Portuguese, Italian and Russian speakers, Charadium can test gamers around the world.

Warpgate, a highly anticipated space exploration game that offers a vast universe of over 35 star-systems to explore in 172 different starships with over 100 main quests. Groundbreaking graphics, fluid controls and endless non-quest missions mean there is no limit to the adventure. Perfect for the Apple iPad’s large, detailed screen and intuitive touch controls, Warpgate promises to be an amazingly immersive experience.

CastleCraft, Freeverse’s first massively multiplayer online game, is a city building strategy title in which players wage war against hundreds of others for realm domination. Players will follow three different quest lines, form alliances and train up to 16 different types of military, resource and technology units. With the ability to battle against friends and other players worldwide, chat in realtime and watch their gorgeous city expand under intricate day-night cycles with dynamic particle effects, CastleCraft is an unrivaled, must-have title.

Flick Fishing HD, from studio Strange Flavour, is the wildly popular fishing game with real flick-motion casting. The iPad version boasts an all-new iPad-specific casting method, more than nine beautiful locations and tons of varying fish to reel in. Freeverse’s Flick Fishing HD ships with all In App Purchases unlocked, including the new Fishing Pro pack and MegaGuide to reveal all hidden quests and tricks for landing the biggest fish!