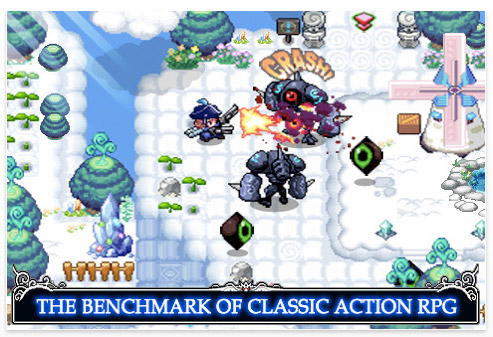 Zenonia fans have been waiting a long time for the release of the sequel.  The original Zenonia game from GameVil was dubbed the alpha and omega of RPGs for the iPhone.  It offered an action based throwback to the days of the SNES and a link to the past.  This week, Zenonia 2 has been released and is taking the app store by storm.  The question is: Can the game live up to the hype?

In a one word answer:  Yes!

For starters, Zenonia 2 uses the formula of the original game.  The same action based gameplay, zany characters and an old school feel.  This time however, several improvements have been made to the structure of the game.  The greatest weakness in the original game has been addressed.  What was once a strictly D-pad controlled game with just a few touch options, has been vastly enhanced with even more touch options and menus putting the iPhones capacitive display to real use.  It needs a little getting used to, but I believe the touch changes are for the better.  Another improvement is the ability to fully customize the location of controls, as well as the size and transparency of them, creating a more intimate experience.

Zenonia 2 adds the multiplayer arena and social networking features.  An amazing addition that allows you to interact with other gamers from all over the world and compete with them.  The characters themselves have been changed allowing you to pick a playing style more suitable to you.  There is the swordsman, gunner, mage, and brawler.  Each character has their special weapons and items,  you can change the appearance of them making your own style for multiplayer.

The actual story itself is ok, the usual RPG thing.  It follows up on the story of the original game, taking place several years later.  The main character and landscape has changed, but you still feel you’re in the Zenonia world.  The only bad thing I can say about Zenonia 2 is that the D-Pad control is still not 100%.  I need to actually feel the controls to really get in to a game, it’s difficult to move the character, and you’ll often miss buttons since there is no response. If there was some way to add a joystick control option I would be in heavin, but it just takes some getting used to.

Being the number one download game and the top grossing game on iTunes must be for a reason.  It may be a bit expensive compared to other iTunes apps – with a $5 price tag – but if you loved the original it’s definitely worth a buy: it’s superior in almost every way.  If you’re a virgin to Zenonia, I would highly recommend playing the first one for $3, beating it,  then advancing to the second.  If you’ve played neither, I guarantee it will be the best $8 you ever spend at the app store.