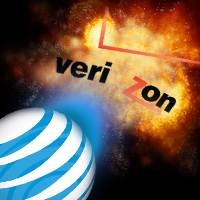 Ever since the original Apple iPhone launched way back in 2007, thousands of customers have complained about how poor the network performance was with the iPhone. AT&T’s exclusivity over Americans gave them little choice but to put up with it or get another phone.

Could the shackles be broken? If the rumors of a CDMA-equipped iPhone destined for Verizon Wireless, why would Apple and AT&T be continuing the a relationship by working closely with Apple to rectify the network issues.  AT&T first provided Apple engineers with “masterclasses in wireless networking,” so that the iPhone could optimized to consistently connect to AT&T’s busted up network. AT&T is throwing alot of money at it – since they’ve made a pretty good killing off the iPhone, how can it hurt to talk to your #1 device manufacturer – and hoping the problems will go away.

Reports further indicate AT&T reps were flown to Cupertino, and no, it wasn’t to check out Starbucks. They met with Apple designers and engineers, gave them a bit of a 101 on wireless networking, supposedly giving birth to a next-generation iPhone to become less of burden to their network.