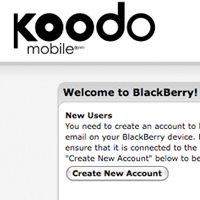 The approach taken by the so-called “budget” carriers in Canada is quite interesting. They start out saying that they want to be as affordable as possible, but they slowly creep up into the territory of their parent companies. It seems that the Telus-offshoot Koodo Mobile could be expanding its business beyond their initial focus of cheap phones with cheap plans. They got a little better with some QWERTY-packing “feature” phones, but it seems that the latest plans are hinting at BlackBerry service too. That’s quite a step up from a simple keyboard-equipped “dumbphone.”

So, what is the source of this rumor? As you may already know, Research in Motion sets up a sub-site for each carrier that uses the BlackBerry service. Some keen sleuths were able to find koodomobile.blackberry.com, possibly pointing out their intentions to offer the largely business-oriented service to their customers. On the other hand, it may be an internal system for Koodo Mobile employees.

If it does surface, Koodo customers shouldn’t expect the latest and greatest from RIM, but since Telus recently launched that HSPA network a pretty good variety of handsets could come your way. Maybe they’ll get the older Storm or perhaps an inexpensive Curve.

By adding BlackBerry to the mix, Koodo Mobile will be able to better compete with Fido (Rogers) and Virgin Mobile (Bell), both of which already do the ‘Berry thing.