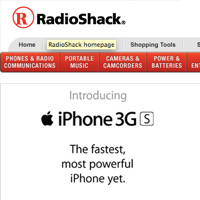 One of the biggest drawbacks to the iPhone – as any good smartphone these days – is having to shell out some serious coin to get one: and you’re not even done there, next you have to sign a contract just to use it.  If you want an unlocked version you sometimes have to resort to shady means to finding a modified device,  then pay an arm and a leg more without any sort of restitution.  Starting today however, iPhones are available at Radio Shack for an insignificantly reduced price.

The real reason for this price drop, which probably negates any profit Radio Shack could have made on the iPhone, is to attract attention to their trade in program. Basically they want your used phones, but your iPhone more specifically.  Radio Shack will shell out as much as $314.29 for an iPhone 3G S 32GB ($15 more than you paid on a 2-year plan) and as much as $150.40 for an iPhone 3G 8GB ($50 more than on a 2-year plan).  Could be a good deal to get you in on a newer model phone, but most people are quite satisfied with their Apple’s, and without an iPhone 4g with improved battery life, bigger screen, and all that jazz, what would you upgrade to?