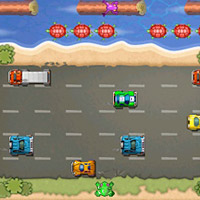 The Tournament is actually more of a sweepstakes more than anything, prizes will be drawn at random according to the official rules.  The grand prize will be a bunch of Konami games valued at $225 in total.  In order to enter you have to go to the facebook page for Frogger. You don’t even have to purchase the app, but it’s a good idea to do so, because it’s a great game.

There will be five winners in total and each will receive the same prize of the $225 worth of Konami games.  Konami is also known for making the Metal Gear Solid, Dance Dance Revolution, Contra, Silent Hill, and Castlevania series.  The contest ends on April 7th at 11:59 PM PST.