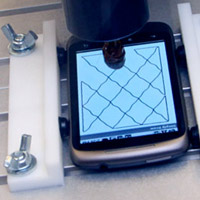 Our friends at Moto Labs have gone to great lengths once again to show scientifically what we already knew. Most mobile touchscreens are way behind the iPhone in their accuracy and sensitivity. Originally, using a simple test technique, their fingers, the team would slowly trace straight lines across the screens of each device using a basic drawing application. They said: “Results with straight lines indicate a high degree of sensor accuracy; less-precise sensors show the lines with wavy patterns, stair-steps, or both.”

Unfortunately, tech-nerds all over the internet were critical of this approach and demanded a more controlled data set. In other words don’t use their stubby, Cheeto-dust covered fingers. So back to the drawing board, the Moto guys wrote a special script for their trusty laboratory robot and then re-ran the comparison to see how the touchscreens stack up when the lines are drawn by a robot’s slow and precise “finger.”

After the Moto robot mechanically groped the phones for a few hours, the team had their results…not much difference from the high-tech “finger” test. The iPhone is still the champ! Being an iPhone user myself, this was fairly obvious from the few times I’ve had to borrow a friends phone to make a call. It’s generally a ghetto version of the real deal. But now you don’t have to take my word for it.

Look at the results below:

In the long run, however, Moto says they don’t expect the high degree of touchscreen variation between handset manufacturers to continue for long because capacitive touchscreens are a relatively new technology to appear in consumer electronics products. Factually, the screens in current phones, besides the iPhone, are all last-generation silicon and touch panel components.

Moto closes by saying:  “the other touch screen makers are hard at work perfecting their new solutions, and they may just leapfrog Apple in some areas when they arrive on the market over the next year.”