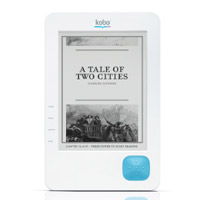 It seems that new ebook device releases are not going to slow down anytime soon,  Wired is arguing that the Apple iPad will not be a Kindle killer. It’s in a different segment altogether. Instead, they’re saying that Jeff Bezos and the Amazon crew should be fearful of the Kobo eReader.

As a quick refresher, Kobo is a global eBook retailer with support from Chapters/Indigo, Borders, REDGroup Retail, and Cheung Kong Holidings. It already supports the major ebook readers (and smartphones) on the market, but it seems that Kobo wants some hardware of its own.

What you see here is the Kobo eReader and, from what we can tell, it’s going to be sold for a mere $150. That’s pretty darn cheap, considering that sure looks a lot like the more expensive Kindle. It has a similar e-ink display, plain white chassis, and long battery life.

There are some shortcomings at that price, of course. The $150 Kobo eReader does not have a 3G connection, for instance, relying instead on SD, USB or Bluetooth to get its content. There is only 1GB of storage, but you can expand with an SD card. For controls, you get that big blue directional pad on the front, but the rest of the buttons are tucked away on the left edge.

The Kobo eReader is cheap and effective, but I think the lack of 3G or atleast Wi-Fi could hurt its sales. The direct delivery model of the Amazon Kindle just seems so much more appealing.